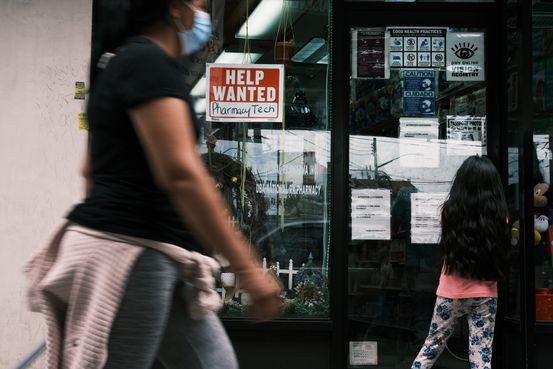 Jobless claims declined to a pandemic low last week, a sign companies are hesitant to lay off employees as the U.S. economy quickly recovers.

Unemployment claims fell to 376,000 last week from 385,000 a week earlier, the Labor Department said Thursday, bringing claims to the lowest level since the pandemic hit last spring. Claims remain well above weekly filings of just over 200,000 logged before the pandemic shut down large parts of the economy last March. But they have steadily declined in recent weeks as rising vaccination rates and easing business restrictions spur economic activity.

“
‘Employers have lots of jobs; they can’t find people, so they’re holding very tight to the workers they have.’
”

“Employers have lots of jobs; they can’t find people, so they’re holding very tight to the workers they have,” said

Employers added 559,000 jobs in May, falling short of many economists’ predictions and reflecting businesses’ difficulties filling open jobs as potential workers remain on the sidelines.

There are numerous signs that demand for workers is picking up as the economy further reopens. Job openings continued to grow in May, according to job-search site Indeed.com. That followed an increase of nearly 1 million unfilled positions in April, to 9.3 million, the highest level on records back to 2000, the Labor Department reported Tuesday.

At the same time, there are millions fewer people seeking jobs since Covid-19 hit last spring. Economists say many factors are keeping Americans out of the labor force, including the fear of contracting Covid-19 and early retirements amid the pandemic.

The claims data suggest that millions of potential workers are still actively searching for jobs but unable to land them. In the week ended May 22, 15.3 million Americans received unemployment benefits through regular state aid and federal emergency programs put in place in response to the pandemic. While total claims are down from a recent peak of 20.8 million in February, they are still more than seven times higher than before the pandemic started.

Some businesses and Republican lawmakers have recently said they think federal pandemic benefits programs, which provide recipients with a $300-a-week federal supplement, might be constraining the supply of labor by discouraging workers from seeking jobs.

Half of U.S. states have said they plan to end participation in federal supplemental unemployment benefits in June or July, before the program expires in early September. Several of these states have also announced bonuses for unemployed workers who find jobs. Around 4.1 million people stand to lose some form of benefits as these plans are enacted, with more than half losing all of their benefits, according to forecasting firm Oxford Economics.

Other reasons that many workers aren’t seeking paychecks include a mismatch of skills between unemployed workers and available positions and increased child-care responsibilities during the pandemic.

Retail sales dropped in May, marking a shift in consumer spending from big-ticket items to goods and services related to going out amid business...
Read more

Lumber prices are falling back to earth.Futures for July delivery ended Tuesday at $1,009.90 per thousand board feet, down 41% from the record of...
Read more