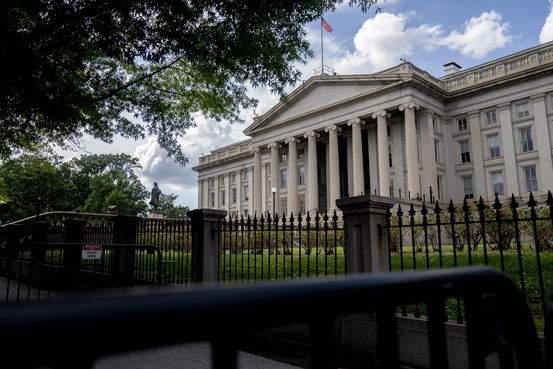 The U.S. budget deficit narrowed to $2.2 trillion during the first nine months of the fiscal year from the same period a year earlier, with the gap between spending and revenue shrinking as the recovery from the pandemic-induced slump boosted tax collections.

Federal revenue during the period rose 35% when compared with the previous year, to $3.1 trillion, largely due to higher receipts from individual and corporate income taxes.

While receipts are rising as consumer and business spending picks up and employers add jobs, supply-chain challenges and a lack of workers for lower-paying jobs are headwinds to growth.

In a separate report released late last week, the nonpartisan Congressional Budget Office said it expects outlays in the first nine months of this fiscal year to be roughly $2 trillion more than spending during the same period two years earlier, before the pandemic struck.

The CBO projects that the federal budget deficit for this fiscal year will reach about $3 trillion. That would be nearly $130 billion less than the 2020 deficit but triple the 2019 shortfall. Relative to the size of the economy, this year’s deficit is projected to total 13.4% of gross domestic product, the CBO says, making it the second-largest since 1945 and exceeded only by last year’s 14.9% gap.

The U.S. isn’t the only country contending with growing deficits and debt. The pandemic has pushed global government debt to its highest level since World War II, surpassing the world’s annual economic output.

The U.S. federal debt has marched upward ever since the fiscal crisis at the end of George W. Bush’s administration and the start of

also ushered in spending programs and tax cuts that widened the gap sharply, even before the coronavirus crisis.

Republicans in Congress have pointed to the federal deficit and debt as they challenge the size of President Biden’s push for trillions of dollars in fresh spending on infrastructure, clean energy, education and other programs. Investor demand for U.S. debt remains strong, however. The yield on the 10-year Treasury note was 1.365% around midday Tuesday, down from 1.745% at the end of March.

How concerned are you about the deficit? Join the conversation below.

Write to John McCormick at mccormick.john@wsj.com