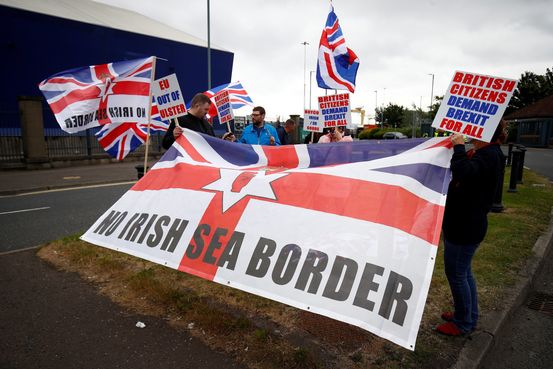 The U.K. government set the stage for a new clash with the European Union after Prime Minister

said he wants to renegotiate the parts of the Brexit agreement dealing with the politically sensitive question of Northern Ireland.

The government says the agreement, which went into force just months ago, is hampering trade between Northern Ireland and the rest of the U.K. The EU on Wednesday ruled out renegotiating the deal and the Biden administration is closely watching the dispute, warning against any steps that threaten the Good Friday agreement that brought peace to Ireland more than two decades ago.

Under the Brexit pact completed last December, special arrangements were made to avoid re-creating a physical border on the frontier between Northern Ireland, part of the U.K. and its southern neighbor, Ireland, an EU member. The U.K. left the bloc in January 2020.

The arrangements, known as the protocol, saw the U.K. agree to customs and regulatory checks on goods, including farm products, moving across the Irish Sea to Northern Ireland from mainland Britain to prevent products made under British regulations from leaking into Ireland and the EU’s single market. There were exceptions for goods that were clearly intended to stay in Northern Ireland.

For months now, the U.K. and the EU have been sparring over the protocol’s implementation, with the U.K. arguing that the EU was rigidly interpreting the deal and denying smooth access to the people in Northern Ireland of some food products, medicine and even of dogs needed to help the visually impaired.

The tensions over Northern Ireland have undercut efforts by the U.K. and the EU to relaunch what had become a tense relationship after Britain voted to leave the bloc in 2016, diplomats on both sides say. It has also led to tensions, including protests and sporadic violence within Northern Ireland, with the protocol opposed by the largest pro-U.K. party but broadly supported within communities favoring unity with Ireland and the increasing number of voters who don’t identify with either camp.

Wednesday’s proposals by the British government call for a broad renegotiation of the agreement, with Mr. Johnson saying, “It has already become clear that it is not possible to operate these arrangements in a way that can be sustained.”

The U.K. set out several proposals, some of which were discussed and rejected during the protracted Brexit talks. They include a dual regulatory system in Northern Ireland, which would allow products applying British standards to be sold in the province without checks as long as they were labeled for sale only within Northern Ireland.

The system would be policed by the U.K. although it would give the EU access to data to show it wasn’t being abused. The U.K. also wants to eliminate the role of the EU courts in judging whether the two sides are implementing the protocol.

To negotiate a new deal, the U.K. government wants a standstill period where legal action by the EU against the U.K. over the protocol would be put on hold. In exchange, the U.K. wouldn’t use a power under the agreement allowing it to disapply parts of the deal.

The clash over the protocol is likely to heighten in September. At the end of that month, grace periods will expire which exempted products like chilled meats from being checked when they crossed from mainland Britain to Northern Ireland. U.K. supermarket chains are warning that shops in Northern Ireland will be left without some fresh food and Christmas products if the grace periods end.

Maros Sefcovic, the European Commission vice president who has been negotiating with the U.K. government on the implementation of the deal, said the EU was ready to continue discussions and seek “creative solutions, within the framework of the protocol.”

“However, we will not agree to a renegotiation of the protocol,” he said, echoing warnings from senior EU leaders.

A U.S. State Department spokesman said the U.S. is backing joint efforts to resolve the issue but called on both parties to refrain from unilateral action and “negotiate within existing mechanisms.”

—Paul Hannon and William Mauldin contributed to this article.

Write to Laurence Norman at laurence.norman@wsj.com