Canadian athletes managed to qualify for further events in track and field at the Tokyo Olympics Tuesday, but missed out on medals in the...
Read more

Before the pandemic, U.S. companies were borrowing heavily at low interest rates. When Covid-19 lockdowns triggered a recession, they didn’t pull back. They borrowed even more and soon paid even less.

After a brief spike, interest rates on corporate debt plummeted to their lowest level on record, bringing a surge in new bonds. Nonfinancial companies issued $1.7 trillion of bonds in the U.S. last year, nearly $600 billion more than the previous high, according to Dealogic. By the end of March, their total debt stood at $11.2 trillion, according to the Federal Reserve, about half the size of the U.S. economy.

That torrent of inexpensive money has benefited all types of businesses. It helped cruise operators, airlines and movie theaters weather the pandemic by replacing some lost revenue with cash raised from bond sales. It allowed thriving businesses to stock up on cash and to save money by refinancing older debt. And it permitted companies that were struggling before the pandemic to ease the threat of bankruptcy by issuing new long-term debt.

“It’s been surprising that the cost of debt has come down as much as it has,” said

, a cell tower owner that has been issuing bonds with progressively lower interest rates to fund capital projects and pay off debt. “We’ve enjoyed the period of time we’re in.”

The question now is whether companies have merely delayed a reckoning. Debt-laden companies withstood last year’s recession far better than many had feared. But it was in many ways a unique shock to the economy, more akin to a natural disaster than a typical recession. For all their current enthusiasm, many CFOs and investors acknowledge that businesses could still be punished in a normal downturn that raises borrowing costs for a longer period and does more serious damage to household finances.

In a May report, the Federal Reserve noted that, by one measure, investors had rarely been compensated any less for the risk of holding corporate bonds, even as stock valuations were in line with historical averages. The report concluded that “vulnerabilities arising from business debt remain elevated.”

Some of the biggest borrowers during the pandemic, according to figures from financial-data provider FactSet, have been those hurt most by it.

, the world’s largest cruise operator, had around $33 billion of total debt as of Feb. 28, almost triple what it had near the end of 2019.

’s total debt more than doubled during the pandemic, to $64 billion, while

doubled to around $35 billion.

said he spent two weeks in March 2020 to try to put together a bond sale, only for debt investors to balk because the company wasn’t also planning to issue more stock.

It took him another 10 days working nearly around the clock to put together a deal that included a stock offering. In early April last year, Carnival issued $4 billion of secured bonds with an 11.5% interest rate—a level typically associated with businesses with rock-bottom credit ratings—along with $500 million of stock and about $2 billion of convertible bonds.

From then on, though, as investor demand for corporate debt rebounded, borrowing money got easier. Carnival sold bonds or obtained loans from investors five more times over the next 10 months, finally issuing $3.5 billion of unsecured bonds in February at a 5.75% rate. In April, Mr. Bernstein said Carnival had raised enough money to last until it resumes full operations. 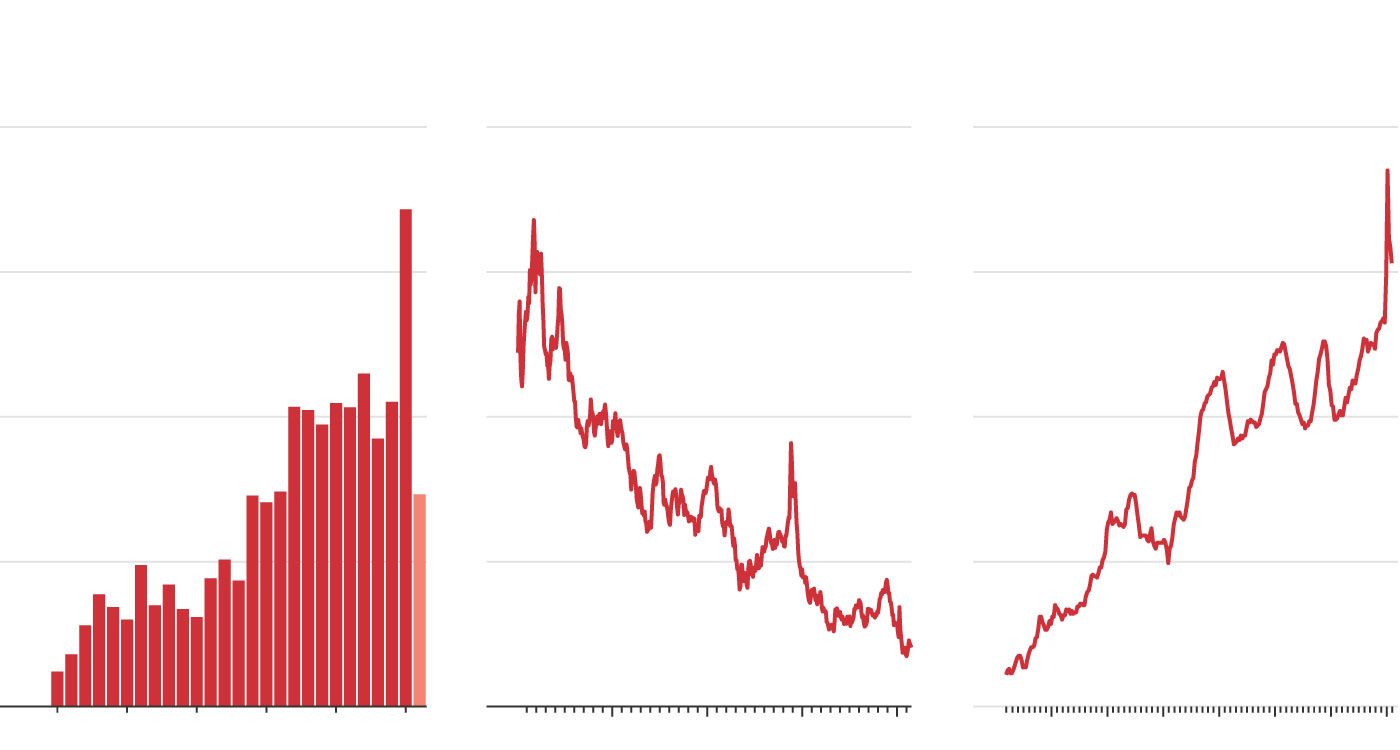 Interest rates on corporate debt have declined in fits and starts since the 1980s, generally tracking short-term rates set by the Fed and U.S. government bond yields.

Several factors account for the decline. Low inflation is one. Also, economic growth has trended lower over the decades, limiting how high the Fed can raise rates without tipping the economy into a recession.

During the 2008-09 financial crisis, the Fed cut its benchmark federal-funds rate to near zero for the first time and started buying large quantities of U.S. Treasurys and mortgage-backed securities in an effort to boost the economy.

After setting a record last year, overall corporate bond issuance remains robust this year, and higher-risk, speculative-grade bonds are now on pace to set their own record.

For many companies that weren’t thrown into crisis by the pandemic, the booming bond market has provided an opportunity to slash interest expenses.

At the start of 2020, the average investment-grade corporate bond yielded 2.84%, a rough indication of the interest rate companies with solid credit ratings would have to pay on new bonds. At the peak of pandemic fears, it rose to about 4.6%, but by the end of last year it had fallen to an all-time low of 1.74%. Companies rushed to try to lock in those low borrowing costs.

which as of March 31 had more outstanding debt than any other nonfinancial company, is one such company. In recent months, it announced deals to shed media and pay-TV assets that it said would reduce net debt by more than $50 billion.

It spent much of last year trying to take advantage of the bond boom to reduce interest expenses and push out debt maturities. In one deal, it issued $11 billion of bonds with maturities ranging from 7.5 years to 40.5 years to pay back bonds maturing over the next five years. In April, it said it had reduced its first-quarter interest expense by $150 million from the year-earlier period.

In June of 2020, Crown Castle, the cell tower operator, issued $2.5 billion of new bonds with maturities as long as 30 years, which enabled it to pay down bonds due in this year and next. And this year, it issued more bonds at its lowest ever interest rates.

Mr. Schlanger, the CFO, said the company can use interest savings to increase its profit margin, or it can pass them on to customers, which include the major U.S. wireless carriers. “Anytime we can take advantage of a market like this to either make more money or lower the cost to our customers, we’re more than happy to do so,” he said.

Do you think U.S. companies can handle their elevated debt levels? Share your thoughts below.

By the end of last year, investors had worked up such an appetite for corporate bonds that they were willing to lend large sums to companies with near rock-bottom triple-C credit ratings. This year, triple-C bond issuance is running 35% above the previous record, according to LCD, a unit of S&P Global Market Intelligence.

one of the country’s largest for-profit hospital operators, has been struggling with the challenges of serving patients outside major cities, and with the fallout from a problematic acquisition. At the end of last year, it was poised to burn through more than $600 million of cash in 2021, according to

Undeterred, investors have snapped up a series of secured bond offerings from the hospital chain since December, enabling it to both reduce its interest expense and extend its debt maturities.

said overall market conditions were a big help, enabling the company to take “a more aggressive approach in doing things quicker than we otherwise may have done.” He also attributed the successful offerings to improved earnings in the second half of last year and progress executing new strategies, which have involved selling underperforming hospitals.

Last month, Moody’s upgraded Community Health’s credit rating to just above its equivalent of a triple-C rating, citing the impact of its recent refinancing deals and improved operating performance.

Not everyone thinks it is good for the economy over the long term for struggling companies to have such an easy time refinancing debt.

wrote last year that one consequence of persistent low interest rates is that it “keeps more unproductive firms alive, which ultimately lowers the long-run growth rate of the economy.”

Some analysts say investors are willing to accept such low interest rates on corporate bonds not only because of the brightening economic outlook but because of the Fed’s aggressive response to the pandemic, which they think could to be repeated in future recessions.

Others are doubtful that even if the Fed announced that it would buy corporate bonds again, it would provide the same jolt to the market it did last year. They say that the normal risks of debt still apply, and that corporate bond investors could face significant losses in the next economic downturn.

Scott Kimball, a portfolio manager and co-head of U.S. fixed income at BMO Global Asset Management, said he doesn’t expect debt to be a problem in the near term, but that it could start causing headaches for businesses and investors in a few years when companies have to start thinking about refinancing some of the bonds they recently issued. Then, he said, “in the next recession, it’s going to be a major issue.”

One encouraging fact for investors is that many companies didn’t add debt over the past year to buy back stock, increase dividends or otherwise juice returns for shareholders. They borrowed money on an emergency basis, and could be in position to pay down debt once that emergency is over.

Mr. Bernstein, Carnival’s CFO, said the company will reduce its debt in coming years by paying off bonds and loans as they come due, using cash generated from operations. The goal, he said, is to reclaim the same investment-grade ratings that the company had before the pandemic.

Boeing has said it will make debt reduction a priority once its cash flow becomes more normal.

Some companies that borrowed money in the pandemic have already started to pay it back.

Delta has said it expects to return to its investment-grade profile within two years. It paid down a $1.5 billion loan in March and said in April that it would repay $850 million of additional debt by the end of this quarter.

issued $2.5 billion of bonds in March 2020 when state and local governments were issuing lockdown orders. Its earnings, though, actually improved during the pandemic, and in October, the company paid down roughly $1.8 billion of its bonds before their maturity dates.

issued $4 billion of bonds in March of last year to bolster its cash holdings. Since last September, it has reduced its debt by roughly $3 billion, including the early repayment of roughly $700 million of its bonds.

“What we’re seeing is corporations make an active attempt to improve their balance sheets,” said

“And as long as we’re seeing that, we’re not going to be concerned.”

Still, he added, “there is certainly an elevated level of debt that needs to be repaid.”

—Kristin Broughton and Mark Maurer contributed to this article.

Write to Sam Goldfarb at sam.goldfarb@wsj.com