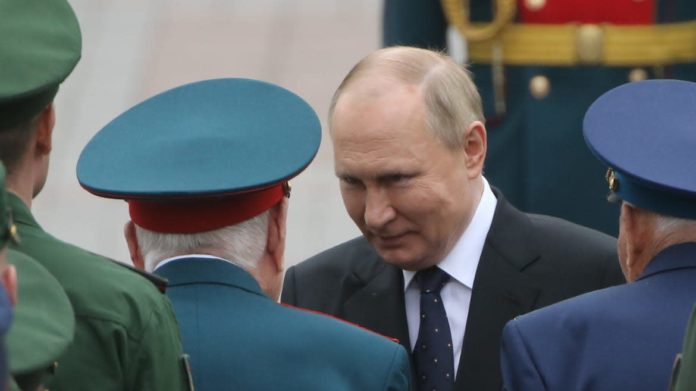 The anti-American atmosphere in Russia is off the charts and now, the Americans who had the misfortune of ending up in Russian captivity are being used as pawns in the Kremlin’s cruel game. Basketball star Brittney Griner, detained in Russia on alleged drug charges, as well as two U.S. veterans captured by Russian troops in Ukraine last week—Alexander Drueke and Andy Huynh—are being portrayed by the Kremlin-controlled state media as bargaining chips in Russia’s crusade against the West.

As Griner’s imprisonment was extended, the U.S. State Department reclassified her status to “wrongfully detained,” meaning that her case was placed under the supervision of the Special Presidential Envoy for Hostage Affairs. Kremlin spokesman Dmitry Peskov bristled against that designation, telling NBC News: “She violated Russian law, and now she’s being prosecuted. It’s not about being a hostage.”

Despite the Kremlin’s denials, the Russian media machine has shifted its tone when it comes to Griner. On Tuesday, host of state-funded TV show 60 Minutes Olga Skabeeva said, “Right now, we also have an American basketball player caught with drugs, so we have somewhat of an exchange fund.” Back in May, without naming its source in the Public Oversight Commission for the Moscow region, TASS reported that negotiations to exchange Griner for Russian arms dealer Viktor Bout are actively moving forward.

The Kremlin has long been determined to free certain Russians in U.S. custody by arresting Americans who could later be swapped. In July of 2018, Russian lawmaker Leonid Kalashnikov commented about the arrest of convicted Russian spy Maria Butina on 60 Minutes, suggesting: “Let’s arrest an American here and that’s it… They arrested Butina, let’s immediately arrest some Amerikashka here.” The same idea has been repeatedly floated on various state media television programs.

During Tuesday’s broadcast of 60 Minutes, State Duma member Aleksey Zhuravlyov intentionally mispronounced the last names of Drueke and Huynh in the way that resembled obscene expressions. Describing U.S. POWs captured in Ukraine as “stupid Americans,” Zhuravlyov said that he could care less about their fate: “They should either be liquidated or exchanged for [Viktor] Bout. We need to get our citizens out of America. Thank God, we have such opportunities.”

Back in 2019, after the release of Butina from U.S. custody, state TV host Evgeny Popov told The Daily Beast that Viktor Bout and Konstantin Yaroshenko would soon follow suit and be returned to Russia. Yaroshenko was sentenced to 20 years for conspiring to smuggle cocaine into the United States. In April of 2022, he was exchanged in a prisoner trade for ex-U.S. Marine Trevor Reed, who was jailed in Russia on charges of assaulting police.

Aside from being mentioned as leverage to extract the sought-after Russian prisoners from the United States, seven-time WNBA All-Star Brittney Griner received very limited publicity in Russian state media. She personifies the trifecta of prejudices often exhibited by the Kremlin’s state TV mouthpieces, including racism, homophobia and pronounced anti-American leanings. For example, White House Press Secretary Karine Jean-Pierre is routinely described by state TV propagandists as a “dark-skinned lesbian,” with state TV host Evgeny Popov predicting that in a matter of months she would be replaced by a “white, heterosexual male.” Vladimir Solovyov, the host of a popular state TV program The Evening With Vladimir Solovyov, along with his guests, routinely refers to Jean-Pierre as “Chunga-Changa,” a diminutive, racist reference to Soviet cartoon’s depiction of Black islanders.

During Wednesday’s interview with Maria Zakharova, spokeswoman for the Russian Foreign Ministry, Solovyov, donning a red sweatshirt emblazoned with the Soviet hammer and sickle, complained: “Western hysteria isn’t stopping for a single moment. The world has never seen such a crazy level of Russophobia.” Zakharova concurred and added: “The evil is not omnipotent. They’ll be getting a harsh response in return. In the past we were held back by diplomatic correctness, but now we respond in ways that benefit us, first and foremost… In the first place, we’ll be thinking about our own citizens… [Westerners] are sick, they’re infected with xenophobia, racism and nationalism.”

The tensions boiled over Wednesday morning on 60 Minutes, during a discussion about a diplomatic employee of the U.S. Naval Attaché in Moscow who reportedly took a picture of Russia’s “Z” symbol that represents the invasion of Ukraine, along with a gesture using the extended middle-finger. Lawmaker Zhuravlyov fumed: “Let this bitch step out one more time. We’re going to find him. Come out of the embassy, drive out. I’ll personally explain to you, bastard, what kind of a country you’re in and how you’re supposed to treat these symbols. Zhuravlyov went on: “This is a direct threat from me, a direct threat… I could spit on his [diplomatic] immunity.”

Pinning their hopes on Trump and U.S. republicans, Russian lawmakers and top pundits repeatedly emphasized their desire to see the GOP force out the Democrats in the midterms, and Biden during the next presidential elections. Appearing on Wednesday’s broadcast of The Evening With Vladimir Solovyov, the participants floated an idea as to how American captives might play a part in defeating Democrats in the midterm elections.

Host Vladimir Solovyov pondered out loud: “How will [the US and the UK] react if the Donetsk [People’s] Republic sentences all foreign mercenaries—Americans and the British—to death and carries out the execution?” Political scientist Dmitry Evstafiev chimed in: “And what if it’s done one day before the Congressional elections? I think that would be very politically correct… But in reality, this is not just about shooting some Americans. The issue is not to let the Americans escape the big European war, but to drag them into it. Every single day every American must know that the new 15 cents are being added to the price of gas because Biden got into the war. We need to intensify our efforts to drag Americans into it… America and Great Britain have to be incinerated in this conflict.”

Evstafiev grimly emphasized: “Americans and the British started this fire and they have to burn in it.”

Read more at The Daily Beast.

Get the Daily Beast’s biggest scoops and scandals delivered right to your inbox. Sign up now.