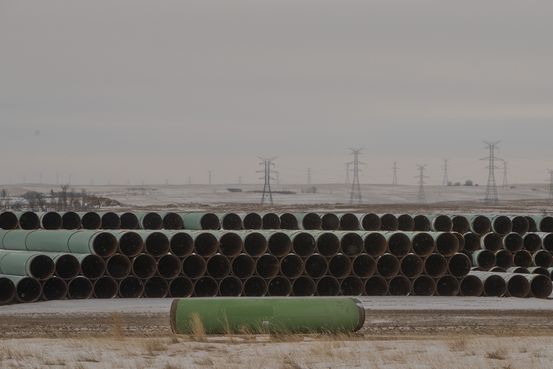 and the Albertan provincial government said Wednesday they would scuttle the Keystone XL oil pipeline project, bringing to an end a yearslong controversy over an effort to pipe more Canadian crude to the U.S.

It marks a historic victory for environmentalists who for a decade have made Keystone XL the focus of a campaign to block new pipeline construction as a way to limit oil consumption that contributes to global warming.

TC Energy gave little explanation for its final decision in a Wednesday news release. It alluded to Mr. Biden’s decision and said it had completed a comprehensive review of its options before making the final decision to terminate the project. It said that going forward it would build its businesses in shipping and storing natural gas, liquid fuels and power to meet growing North American demand for cleaner fuels.

“We value the strong relationships we’ve built through the development of this Project and the experience we’ve gained,” TC Energy Chief Executive François Poirier said.

Select breaking and enterprise stories about energy markets and businesses, through news alerts delivered to you via email.

Groups like 350.org, which targeted Keystone XL, are also pressuring Wall Street to curb fossil-fuel extraction and were a force behind activist investors winning board seats at Exxon Mobil Corp. earlier this month.

Environmental groups called TC’s decision a landmark moment and 350.org pointed to its own history of leading sit-ins against Keystone XL in front of the White House. It said it would work to defeat more pipelines.

“When this fight began, people thought Big Oil couldn’t be beat,’’ said Bill McKibben, the founder of 350.org. “But when enough people rise up, we’re stronger even than the richest fossil-fuel companies.”

Emboldened by the successful fight against Keystone XL, protesters have taken aim at other Canadian pipelines. On Monday, protesters in Minnesota clashed with police as they demonstrated against

construction of its crude oil Line 3 artery through the state. In Michigan, Democratic

is trying to revoke a permit that allows the company to transport oil and natural gas under the Great Lakes.

Mr. Biden’s permit cancellation was a major setback for Canadian oil producers and the Canadian government, which had urged Mr. Biden to help salvage the $8 billion project immediately after his election. Keystone XL has been mired in court challenges and left in limbo by shifting U.S. political leadership since it was initially proposed in 2008.

That was a time of record oil prices, and the pipeline was pitched as a key artery to eventually bring 830,000 barrels a day of Canadian crude from Alberta to Nebraska and then to refineries on the U.S. Gulf Coast. Since then, Canadian oil producers have been rocked by falling oil prices and the government had doubled down on getting approval for the project as a lifeline for the industry.

But Mr. Biden agreed with environmentalists who said opening that avenue for more crude into the U.S. conflicted with a need to respond to climate change by shifting to cleaner sources of energy. He said allowing the project to go ahead would undercut the country’s international credibility as Mr. Biden tried to push other countries to lower their greenhouse-gas emissions.

“We remain disappointed and frustrated with the circumstances surrounding the Keystone XL project, including the cancellation of the presidential permit for the pipeline’s border crossing,” said Jason Kenney, premier of Alberta. The province had invested $1.1 billion in the project and will now have to swallow the cost. The government said it would continue to explore its options to recoup its money.

came before TC Energy could finish construction in the U.S. It promptly suspended construction, saying it would cut more than 1,000 construction jobs.

Mr. Biden’s critics decried the layoffs and several Republican states launched a lawsuit to overturn it. It wasn’t immediately clear what would happen to that lawsuit.

“It’s a disgrace President Biden played politics and killed the Keystone XL Pipeline,” said Austin Knudsen, the attorney general in Montana, the lead plaintiff—along with the Texas attorney general—of 23 states. “The pipeline would have enhanced America’s energy independence while bringing much needed jobs, tax revenue, and economic development to rural communities in Montana and across the country.”

More coverage of the pipeline, selected by the editors

Write to Timothy Puko at tim.puko@wsj.com and Vipal Monga at vipal.monga@wsj.com