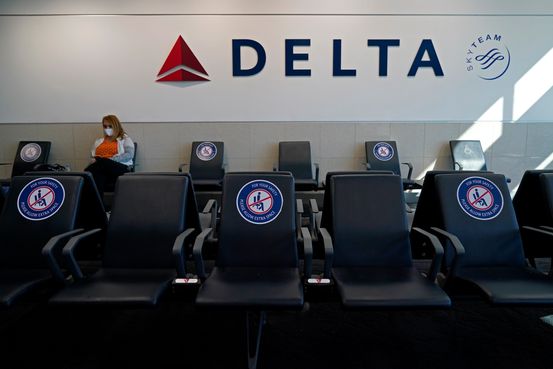 Airlines are trying to put the Covid-19 pandemic behind them. For Delta Air Lines Inc., by virtue of its name, it may be a bit harder.

Airlines are coming off what executives have said was the most difficult year in their history. The coronavirus decimated travel demand: People canceled trips in droves and planes took off nearly empty for months. Major airlines lost some $35 billion last year.

All airlines faced those troubles. Only Delta is in the unfortunate position of sharing its moniker with a highly transmissible variant of the virus that has been linked to a new surge of infections world-wide.

“We just call it the variant,” Delta CEO

said in an interview.

The so-called Delta variant, also known as B.1.617.2 variant, is more infectious and appears to be somewhat more effective at evading vaccines than other variants that have emerged so far, though preliminary research suggests full vaccination protects well against severe infections. It is the most worrying of the B.1.617 lineage, first identified in October in India, and has become the dominant strain in the U.S.

The airline says it isn’t concerned about confusion. The Atlanta-based airline was named for the Mississippi Delta region, where the carrier got its start as a crop duster.

While executives have privately grumbled about the connection, according to people familiar with the matter, the company says there are no signs that concerns about the variant are weighing on travel bookings, as many customers have been vaccinated.

“We haven’t seen any drop off at all,” Mr. Bastian said.

Delta on Wednesday reported its first quarterly profit since the pandemic began, boosted by about $1.5 billion in government aid and a summer rebound in vacation travel. The airline says it believes the momentum will continue through the rest of the year.

Credit for the variant’s name belongs to the World Health Organization. After consulting with experts and considering several naming conventions, the WHO in May said it would use letters of the Greek alphabet to assign “simple, easy to say and remember labels” for key variants. The WHO said at the time that it wanted to avoid variants being labeled by the place they were first detected, which it said could lead to stigma and discrimination.

“We prefer to call it the B.1.617.2 variant since that is so much more simple to say and remember…,”

The airline isn’t the only company that has had to deal with the overlap. A dental-insurance provider and a faucet maker are among the other Deltas in the same fix. Neither company responded to a request for comment.

Get a morning briefing about the coronavirus pandemic three times a week and a weekly Health newsletter when the crisis abates.

senior vice president for brand marketing at Constellation’s beer division, told The Wall Street Journal last year that the company faced added pressure due to the name coincidence with the coronavirus.

But despite early fears that the pandemic could damage the brand, beer drinkers were undeterred, and sales held up, the company said last year. Constellation also launched a Corona-branded hard seltzer drink last year, and said it was a hit.

In a virtual Q&A at the Economic Club of Washington, D.C., this week, United Airlines Holdings Inc. CEO

was asked jokingly how he’d managed to arrange having the troublesome variant named for a competitor.

“I did enjoy giving Ed Bastian a hard time when I saw him a few weeks ago,” Mr. Kirby said.

The issue may fade as other variants emerge. The WHO has flagged Eta, Iota, Kappa and Lambda as “variants of interest.”

Mr. Bastian said: “There’s other variants coming up behind it.”

What’s in a Name?

More WSJ coverage of the Delta variant, selected by the editors.

Write to Alison Sider at alison.sider@wsj.com