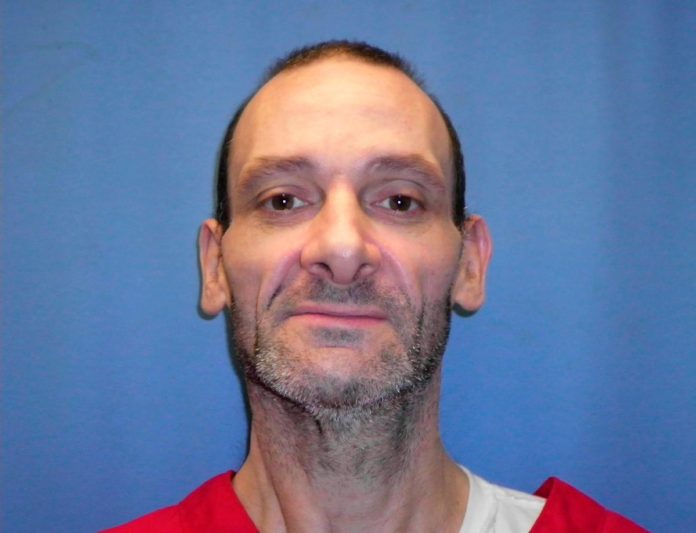 At 6 p.m. Wednesday, Mississippi inmate David Neal Cox is expected to be executed by lethal injection at the Mississippi State Penitentiary at Parchman. Check here throughout the day for live coverage of the day’s events.

How did they get there?Three dozen men and a woman are on death row in Mississippi.

“I want my children to know that I love them very much and that I was a good man at one time,” MDOC Commissioner Burl Cain said Cox told him. “Don’t ever read anything but the King James bible. I want to thank the commissioner for being so very kind to me. And that’s all I got to say.”

Cox’s family, who did not attend the execution, has not spoken out about his execution.

“We don’t know of any comment they (Cox’s family) want to make,” Cain said. “If they wanted to make a comment, they would be here, I suppose.”

During the final press briefing, Cain was asked again about the disappearance of his sister-in-law Felicia Cox. The commissioner said Cox mentioned he left a letter with someone who would mail it after his death.

He did not say who had the letter.

Cox was directed from his cell to the execution table. Cain said he spoke with Cox about whether he would experience pain and going into the afterlife.

“I think people were really good and didn’t hurt him,” Cain said.

“Couldn’t have been more smooth (the execution process),” he said. “No glitches with this, as smooth as this can be.”

Vigils and protests around the state have begun ahead of the scheduled execution of David Neal Cox. One is being held outside the prison gates. Another was expected at the state Capitol, but no one was there. A couple protesters stood outside the governor’s mansion.

One vigil is set to begin at 6 p.m. at University Baptist Church in Hattiesburg, where members will be praying not only for Cox, but for putting an end to the death penalty, the Rev. Brett Harris said in an interview with Death Penalty Action.

“Tonight is going to be a tough night at the church for everybody,” he said. “We pray they will stop choosing violence.”

Harris said members of the church’s prison ministry have been working with Cox and attending to his spiritual needs.

Cox’s two witnesses and his spiritual adviser are from the prison ministry, Harris said.

“He felt they were the only family he had,” Harris said. “They are there to give him the energy and love and dignity he needs.”

Cain, the deputy commissioner and three chaplains were there while he ate.

“He was OK and ready to go,” Cain said. “He talked about closure to the victims, particularly to his sons, because, you know, for taking their mom and so forth. That’s a good thing. He’s pretty normal at this time.”

An hour earlier he visited with his attorney.

Cain said the hearse that is on standby to take Cox’s body to the funeral home after his scheduled execution, but he does not know who will be claiming Cox’s body.

Cox is scheduled to enter the death chamber at 5:45 p.m.

Ahead of the MDOC’s second media briefing, journalists were writing stories, uploading photos and preparing copy for broadcasts.

Mississippi Department of Corrections officials wandered in and out of the media area while other activities in Mississippi’s execution protocol guidelines.

Outside the prison, several people gathered ahead of a 5 p.m. protest. Other death penalty protests and vigils are being held throughout the state.

While social networking sites are talking about Cox’s scheduled execution, another execution, planned for Thursday, is taking center stage.

Oklahoma is set to execute Julius Jones, despite compelling evidence he may be innocent of the murder he was convicted of in 1999.

On Nov. 1, Oklahoma’s Pardon and Parole Board voted 3-1 to recommend clemency for Julius Jones. They recommended Jones’ death sentence be commuted to life in prison with the possibility of parole.

What happens to the body?: Mississippi set to execute first inmate in nearly a decade

3 p.m.: Cox asked for execution to be expedited, commissioner said

Mississippi Department of Corrections Commissioner Burl Cain said Cox’s execution was scheduled because he sought death and put a halt to the appeals process.

“One thing that moved this one along is that he wanted the execution,” Cain said of the speed in which Cox’s planned execution has panned.

The commissioner said he did not know when or even if another execution would be scheduled in the near future.

A second media briefing will begin at 4:45 p.m., a little more than an hour before the lethal drugs are expected to be administered during David Neal Cox’s planned execution.

Cain apologized to media representatives for the heat in the briefing area.

“I didn’t realize the air conditioning was off,” he said.

Organ donation: Can a death row inmate participate? Here’s what some experts say on the subject

Cox’s last meal was announced during the first media briefing ahead of his execution. Mississippi Department of Corrections Commissioner Burl Cain said Cox will have fried catfish, french fries, cornbread and banana pudding for his last meal.

Cain said Cox is calm and “upbeat and Parchman has tended to his needs.

“He asked a lot of questions,” he said. “He did a little bit (of expressing remorse for his crimes) this afternoon. I think he qualified it best saying ‘I wasn’t always that bad.'”

Cox did not talk about the 2007 disappearance of his sister-in-law, Felicia Cox, something Felicia Cox’s daughter Amber Miskelly had hoped for.

Cain said Cox has a spiritual adviser and two witnesses. Neither are relatives.

This is Cain’s first execution as corrections commissioner in Mississippi, but he has overseen seven executions when he was warden at the Louisiana State Penitentiary at Angola.

“This is what our job description calls for and this is just what we do,” he said.

The state is following the same procedure it had during its last execution in 2012, Cain said.

Executions in Mississippi: A brief history of hanging, electric chair and more

1:15 p.m.: No complications expected during execution

Mississippi prison officials say they do not foresee any complications during the execution of Cox, even though they plan to use midazolam, the same sedative used in the Oct. 28 execution of 60-year-old John Marion Grant in Oklahoma.

After being injected with midazolam, the first of three drugs used in lethal injections, Grant began convulsing and vomiting, The Oklahoman reported.

Executions: What methods are still practiced in Mississippi? The US?

Midazolam is latest drug scrutinized as more and more of the drugs used in the death penalty become unavailable, pulled from sale to prisons by manufacturers who don’t want their products associated with execution.

Outside the front gates of Parchman, the sun beats down and high winds kick up, blowing dirt across the flat Delta land.

Inside the prison is a sharp contrast. Reporters are being herded into a visitors area about 100 yards from Parchman’s main gates. There are no exterior windows, and the atmosphere is stuffy and hot.

Mississippi Department of Corrections communications staff is setting up a staging area for media briefings, the first of which will begin at 2 p.m.

An online petition by a human and civil rights group to abolish the federal death penalty has garnered close to 5,000 signatures to halt the execution of David Neal Cox.

Death Penalty Action’s petition includes a letter to Gov. Tate Reeves to stop the execution. As of 11 a.m. Wednesday morning, the petition has collected 4,625 signatures, needing 1,775 more signatures to reach a goal of 6,400.

Catholic Mobilizing Network, a national organization mobilizing Catholics and all people to end the death penalty, also urged residents to send a message to Reeves online voicing their opposition to the execution. The webpage states the Catholic Church teaches the death penalty is unacceptable and “an attack on the inviolability and dignity of the person.”

Mississippi’s first since 2012: What to know ahead of the execution of David Neal Cox

Death penalty opponents spoke out against the planned execution of Cox.

Faith leaders and numerous civil rights and human rights organizations on Tuesday spoke out against the state’s death penalty, calling it immoral and unlawful.

Representatives of the Catholic Dioceses of Jackson and Biloxi and the United Methodist Church issued or read statements saying the death penalty goes against their churches’ teachings.

Leaders with Death Penalty Action, an organization leading the campaign to abolish the federal death penalty, traveled throughout the state to raise awareness that Mississippi has not held an execution since 2012.

Lea Campbell with Mississippi Rising Coalition, a multiracial, multigenerational coalition of Mississippi residents committed to advancing human rights and racial and economic justice, said the death penalty does not deter crime, but rather perpetuates violence and degradation of the value of human life.

In contrast, Gov. Tate Reeves and Attorney General Lynn Fitch said they would not stand in the way of Cox’s execution.

David Cox and his then-wife Kim Cox separated in 2009 after Kim Cox’s daughter, who was a minor, said David Cox sexually assaulted her, according to court documents. Kim Cox reported the incident to police, leading to David Cox’s arrest.

On May 14, 2010, David Cox purchased a handgun and two extra magazines, court documents show. He went to the home of his sister-in-law, where Kim Cox and her three children, including two with David Cox, were staying.

David Cox shot into the home. His sister-in-law and one of his children escaped and called for help. David Cox took the others hostage for more than eight hours.

He shot his estranged wife in the stomach and sexually assaulted his stepdaughter in front of Kim Cox as she lay dying.

David Cox pleaded guilty in 2012 to eight charges, including capital murder, sexual battery and kidnapping. A jury unanimously sentenced him to death for capital murder and 185 years for the other charges.

Execution will give closure: Father of Kim Cox, killed by estranged husband David Cox, speaks out

In 2015, an attempt at an appeal failed, and in 2016 his attorneys sought to get post-conviction relief for Cox based on new evidence, they said.

In 2018, Cox halted any further appeals and asked the court to set an execution date. Mississippi set a Nov. 17 execution date for Cox in October.

Impressive Alcaraz wins in Madrid for 4th title of the year

Taiwanese father accused of abusing his 1-month-old son because he resembled...